The Body as an Interface

Biomechanics is a rising field of interest for many different people from medicine to sports and even into the arts.  The human body can be monitored in a variety of ways from eegs which measure brain waves,  eogs to measure eye movement in sleep studies,  heart and breathing monitors. The depth of research into this world is an abyss that seems to be come ever deeper the more one learns about the subject.   My interest in the subject remains within the arts and with movement as a control of a non-clinical environment.   Our main limitation is that the human body can can only (as of yet) be interfaced superficially.   This leads to problems measuring human movement because joints which could be hard to measure on their own are even harder to access because they are deep to certain muscle groups and skin.  For a short example of the complications, take just the lower body from the superior structure the hips down to the inferior ankles.  By limiting possibilities to the larger movements of the skeletal system (particularly to those inferior to the transverse plane) you end up with only six large joints acting independently of all others. For monitoring, movement these joints can be looked at in 3 pairs of root sensor systems.

When standing, we can say that the body is at unity or the starting/natural state.    Most joints are in their natural state of extension in this position.  and then...

When dealing with the hips circumduction becomes a problem because of the 3 Dimensional conic movement of a ball and socket joint.  The closest electronic analog i can think of is a joystick which measures potentiometers on two axis  and outputs both position values like coordinates (x,y). if we were to use a flex sensor we could only measure the anterior hip motion along the the sagital plane because of the gluteus maximus and hamstrings on the posterior which mask the small angle of movement we could measure if we had access to the acetabulum where the head of the femur makes contact with the coxal bone.  One might be able to measure the movement of the greater trochanter but that would still be difficult with the muscles which act as the flexors of the hip joint. This problem holds firm when you try to measure abduction(open) and adduction(closed) on the frontal plane as you would see it in Leonardo's  "Anatomy."
{as a side note measuring the medial and lateral rotation would be difficult as well}

The knees being a hinge joint are the only joint on the lower body that can be easilly monitored using a flex sensor.   Hinge joints lend themselves to this type of monitoring because they have one state of extension and one state of variable flexion from 180 degrees all the way open down to about 10 degrees as folded as possible.  Flex sensors aren't really useful for any other type of synovial joint.

Measuring the ankle is weird because its natural state of extension lies between two points of flexion: dorsiflexion with the toe up and plantarflexion with the toe down.   One could put flex sensors along the achiles tendon and the dorsal part of the foot where the tibia and fibula meet the talus.

More of the foot could be wired up to flex sensors for each of the phalanges and metatarsals but the shoe probably wouldn't be very comfortable.  For the foot I would like to develop some sort of measurement device that would be more intricate but similar to the type of system that you see in children's flashing led shoes.  the system would have quite a few pressure sensors embedded in the soul of the shoe to measure the anterior most end of the metatarsals through the phalanges and cuboid area and also below the calcaneus to measure the weight displacements as a user moved and balanced in different ways. 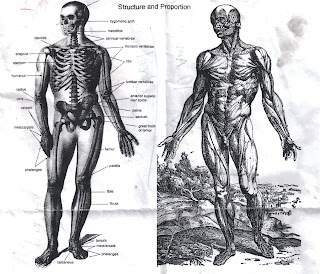 So you see talking about the body could get complex, let alone measuring it. Then there is a whole new slew of fun to be had by all.  So the knees and elbows are easy bend sensors,  and then... fubar...

If you like the flexion measuring its worth a look at the MidiDancer developed at CalArts by Coniglio and Stoppiello of company Troika Ranch.   That's where it has all already happened in dance... has been happening since 1984...probably longer... at the risk of repeating the grand.

I had original aspirations to use such a system for performance after having my brain fully warped by the book "Machine Musicianship" by Rob Rowe.   It was Morton Subotnik's work "Intimate Immensity" and his use of infra-red beams in a system technically executed by Clay Chaplin and danced by Nyoman Wenten that led me to CalArts in the first place.  My exploration of sensor possibilities for retrieving information from the human body began with the use of video to track motion, followed by research into things such as joint angles and rotations, muscle stretch or tension, and pressure for weight displacement on the plantar surface of the foot.

In my search for better sensors I came across some interesting developers and their websites.

The porcupine is made of several tilt / ball switches which recognize motion and orientation on the three planes, it could be quite useful.

I also found a similar sensor that reads full 3d motion and comes with software(very cool).  www.xsens.com.  It uses small blocks which could be fitted to the femur and the tibia/ fibula and would send out information about the orientation of those bones.  Really, useful stuff it also says how fast it moves etc.. check it out.

Also, there is a book called "Three Dimensional Analysis of Human Movement"  containing essays of many different scientists edited by Paul Allard.