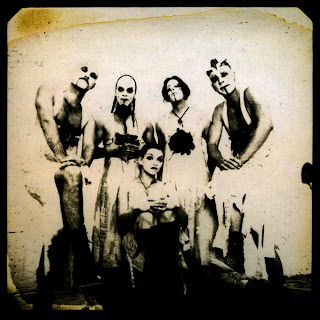 Sleepytime Gorilla Museum  came like a storm out of Oakland California,  as shouting expression of Experimental Metal brilliance.  Being a group most often seen in smaller venues, SGM delivers one of the most powerful shows I have ever seen live, and I mean ever.  I have witnessed performances including costumes, make up, performance art, specially built custom instruments and always an extremely tight band playing complex intellectual and powerful music.  They have managed, despite their creativity and musical superiority over most bands,  to stay humble, true, and approachable to their fans. As seen in their farewell announcement.

"If you go to these shows, You will have seen
Sleepytime Gorilla Museum for the last time.
As it turns out,  we are being replaced.

It has been an honor to make music with you,
both in the room and not."

It was a shock to be presented with the news that this amalgamation of gifted musicians is pursuing an alternate future from their life spent almost endlessly in the old bus that they have known as a home since 2001.  The Museum is closing its doors after a triad of forward thinking albums which are Avant-guard and Classical combined with progressive metal, and in the end indescribable as anything other than amazing.

As fortune allows this breaking of the SGM fellowship has left behind a legacy of music, including side projects like Tin Hat Trio, Faun Fables, Book of Knots, and the newly formed Causing a Tiger which will continue to carry the flame.


YOU WILL BE MISSED BUT NOT FORGOTTEN SLEEPYTIME GORILLA MUSEUM.
Posted by Blanton Ross at April 02, 2011