The Making and Breaking of Woodstock 1969 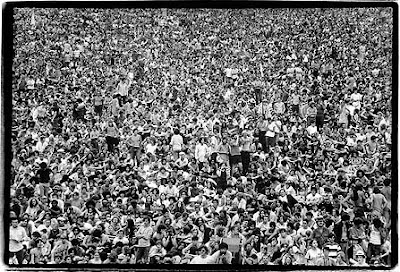 Who could have possibly imagined that a "Music and Art Fair" dreamt up by four young men would become one of the most talked about events in recent history?
Many skeptics believed that an event supported by a bunch of drug crazed youths would inevitably turn violent,  after all the organizer were advertising a gathering of about 60,000 people.  However, as a slap in the face to dumbstruck elders, the festival now known world wide as Woodstock, turned out bigger and more peaceful than anyone could have ever imagined.  Not to say there were no problems, but considering that an estimated 500,000 people from many different walks of life were mixed together for almost four days with a limited food supply, few restroom facilities, an abundance of drugs and alcohol,  a show stopping rainstorm,  and don't forget the evil loud music, things were basically positive.  Elliot Tiber referred to Woodstock as,  "a Counter-cultural mini-nation in which minds were open, drugs were all but legal, and love was 'free."      Although Woodstock was not the first outdoor festival it set the stage for all outdoor festivals that have since followed.  Woodstock can not be acurately imitated ever again, but it sets an extraordinary example for those who would try and follow.


In 1968 at the age of twenty-three Michael Lang got into show business after running one of Florida's first head shops.