The Future of Noise Music and Childrens Rebellion

In this time of Miley Cyrus, Beiber boinking Selena Gomez, American Idol, Rhianna getting beat up over a herpes incident,  Lady Gaga's fashion use to gain stardom,  Green day getting old and political,   Chocolate Rain and the Double Rainbow Song blasting to insane YouTube heights, remixed and remashed media overload,  shortening attention spans,  the flooding of the markets by the amateur,  the birth of indie music.  the death of indie music, a label driven genre called indie.  Where are we headed?  Blending backwards and round we go again, shifting each pass with a new hue to collide with the old.  Musical trend cycling has placed us in an 1980s shit warp.  The music industry has been shaken in so many ways by technology since the early nineties, the advent of digital music,  freeing up the market to the underdog.  What began as an assault on the damage already done by the big record labels has backfired by the the "Do It Your Selfers" flooding the market with thoughtless mediocrity.  The recording of music was once difficult when proper facilities and the knowledge of their operation was required... now any Joe can do it with programs that come standard on a MacBook or in an iPhone app.  Quality control right out the window.
So now the trick is to get noticed amongst the rubble... somehow... and the musical revolution has been reduced to a media manipulation popularity contest.  To have the time to create quality creations often means the neglect of the realities of the day: kitten comments,  Chuck Norris,  drunk babies and the ruthless recycling of media on and on, though the concept of Memes has become a digital virus, its not really a new idea is it?  Warhol was doing it and now you can too with the war hole preset on Mac Photo Booth.   Complain about it as much as we can,  this reality is here to stay.  What is? What is just stupid?  Indifference and small thought.  It has all been said before.

There is rumor on the wind of Americana bursting through the earth and back into the mainstream, but  the nature of revisionist roots music is inherently reproducing a much further back past. So we wait for a movement, in which something unique will bubble its way into the Echelons of Popular culture.


But there is hope, Ruscha knew it 40 years ago. 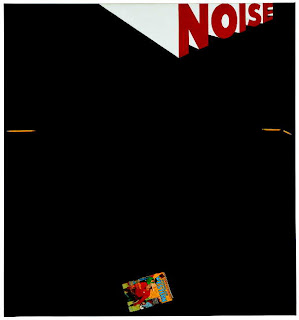 There is possibility the future must be opening towards, and rebellion must certainly play its part in the midst of the brainwashing seeking to render us all thoughtless at the mercy of Murphy's Glee recycling.  Some massive cataclysmic shift away from the American Idol prototype of stardom.   Thought is hoped to prevail,  but it is rebellion which is unavoidable.  If you like the music your parents like, most likely it's not cool.  For those fortunate enough to have parents with good taste, there will probably be a period of rebelling into something else in between.   So that you can come back to it with a mature mindset shaped and renovated before being allowed to think its cool.   Noise is the path, the disturbance in the status quo,  like Obi Won Kenobi It's our only hope.  Just wait and see.  The pure opposite of pop... but as pop?

It has begun rising up through the Cracks especially in Electronic music like Mr. Oizo, The Books, Matmos, Lexanculpt, Hrvatski, The dirty synthesizer,  the Digital Concréte manipulation of audio files.  Despite being ideas Explored By Pierre Schaeffer, Stockhausen, Iannis Xenakis in the early 1900s they have not fairly found their way into the public sight.  Merzbow with his monstorous forward thinking, leads Japan as a beacon of hope to the underground success of noise followed by such names as Melt Banana, The Bordoms and then the much more highly musical Worlds end Girlfriend who pulls no punches when it comes to being noisy.  Add this all to The Underculture of Industrial, Einstürzende Neubauten, Diamanda Galas, Skinny Puppy, Wolf Eyes, Yellow Swan, this stuff makes the Ultimate act of musical rebellion of the 70s seem like kids with guitars.  Not to subtract from Punk music in any way,  It has most definitely paved the way. And is probably the greatest example of how a countercultural movement can swing its way into becoming a Pop culture phenomenon.

Mark my words, It will not be too long before noise rises.  The economic situation is ripe, people feel unsettled, it leads to needing an outlet, something aggressive perhaps they will take to the streets perhaps they will burn things. We can hope that a creative outlet overwhelms the destructive one.  Street art carries the poetic terrorism inherent in boundary pushing, and doesn't something so underground rising to popularity deserve its own special soundtrack.  New is needed, something is going to have to give,  Kids will only put up with so much of what they are fed. The standard quality of music has become flaccid, There is just not enough time to practice being a real musician. The tools exist to turn everyone into a walking sampler. And this will truly be the failing and breaking point of the noise movement.  The copy cats who think that noise has no shape or form.  The limited mind space to look at the abstract painting and say I could do that and regurgitate with out the background.  But none the less this is the nature of Pop, and the blanket it will weave will ever grow. and in the end perhaps computers will make music only for other computers to hear.