Banksy and Hirst Show Us How To Make "Real Art"

I'll go ahead and kick this off with a work by Two of the biggest names in Contemporary Art:  Banksy putting a stencil on top of  Damien Hirst's patented polka dots.  More than likely an outside party was commissioned to paint the exposed canvas frame if not the whole thing.
The work is titled "Keeping it Spotless" and sold for $1, 870, 000.00 at Sotheby’s in New York on Valentine’s Day, 2008. Not a shabby price! Bono and Gagosian Gallery were also involved in The (RED) Auction held for the United Nations Foundation to support HIV/AIDS relief programs in Africa conducted by The Global Fund to Fight AIDS, Tuberculosis and Malaria.  Isn't it cute? 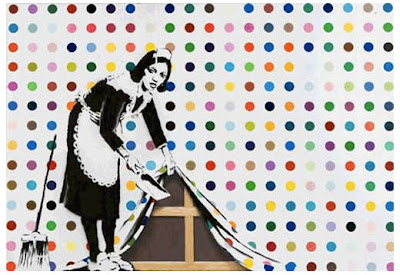